You might be too concerned with saving money.  You might want to even stop saving.  That isn’t the traditional advice from a financial advisor.  But in 2018 the rules are a little different.  With the price of housing near cities in the United States, and the rate at which it is appreciating, if you are trying to squirrel away money by sacrificing on where you live, you might be costing yourself big time in the long run.

Cities are expensive.  They are expensive because housing costs are higher, and the general cost of living can be high around urban areas.  Groceries, restaurants, daily life in a city, it can add up quickly.  You may be tempted to leave the expensive grounds of the city behind for cheaper rural pastures.  You shouldn’t do this.  Spend your money on a location that is within commuting distance of a big city.

If you think that you are better off living outside of a city and spending less on your cost of living, you are probably giving up way more in earnings potential than you are going to save.  Not only are you giving up the income potential that comes with living in a city, but you are probably sacrificing your ability to take classes and additional job training as well.  Invest in your location, and invest in your career training and advancement.  In the long run, you may experience a windfall financially that far outpaces the benefit of saving.

People make money in cities.  Now this isn’t to say that people are not capable of making money outside the cities.  If you go to any rural community there are sure to be a few “rich people” around.  Some people make a lot of money farming, or on natural resources, or by owning wildly successful businesses outside major metropolitan areas.  But if you look at the statistics, you clearly have the greatest chance of making the most amount of money if you live around the biggest cities.

Here is a map showing median incomes across the country:

As you can clearly see, the highest incomes are around the major cities.  Boston, Washington DC, Los Angeles, Miami, Seattle, Chicago; it is clear that the money is where the cities are.  In Boston, the median family income is over $102,000!  Not only that, but almost 14% of the families in Boston make over $200,000 a year.  Compare that to Maine, an hour and a half drive North from Boston, and the median family income drops to $68,000, a full $34,000 less per year.

Over the course of 20 years, if the gap inflates at the normal rate of pay increase of 3% per year, that adds up to a difference in earnings of $915,000!  Clearly the premium in pay to live near a major city adds up to a lot of extra money.  For some people, this gap is even larger and can account for a couple million dollars over a couple of decades.

There really is no debate, living around cities affords people the chance to make a lot of money.  There are a lot of reasons for this, but cities tend to be the financial capitals of the States that they are in, and the country as a whole.  New York is considered by many to be the financial capital of the world.  San Francisco is considered the technology capital of the world, and has billions of dollars in funding flowing through the myriad of tech start ups.  Working in wealthy and growing industries like tech and finance gives people a very high earnings potential.  The cities tend to be where these jobs are located.

The Real Difference In Housing Costs

You may be telling yourself that it is smarter to live further away from the city, and to save money on your housing.  If you commute into the city every day and earn city wages, but pay rural prices, you might have a point.  But inevitably the commute wears people down.  It is hard to sustain that commuter lifestyle for decades, and people often settle into simpler lives with a small commute in their towns.

How much are you really saving?  Here is rental data on over a thousand metropolitan areas around the US. If we take Boston as a market, the median one bedroom is $2,091.  New Hampshire, which is just far enough from Boston to be very rural and present a sizable commute of one-to-two hours to it’s residents, is $1,303 per month for the median two bedroom, a difference of $788 per month, or $9,4560 per year.

So as you can see the median family does save nearly $9,500 a year in housing costs (using the rental market as a proxy), but costs themselves tens of thousands of dollars per year in income!

Our founder, Thomas Rockford, has experience providing financial planning advice for a wide range of clients.  He says that the income disparity between cities and smaller communities can get even larger depending upon your profession.

“For professionals, the median data set can be deceiving in terms of the true difference in pay.  A lawyer or account working for a big firm in a city may earn well into six figures.  In a rural area, they may struggle to clear $65,000 for a small practice.  Especially for duel income families, the differences in pay can be astronomical.”

As people develop in their careers, the cities also offer the most room to grow and to improve.  The consequences of better training opportunities and education can really add up, and further create a snowballing effect of higher pay and career advancement.

Educational Opportunities are In Cities

It is no coincidence that we generally see the highest concentration educated people in cities.  Cities both attract talented people with higher education, and tend to have many Universities in close proximity.

Major corporations in turn often keep headquarters in the major cities, because that’s where the greatest talent pool to drawn on lives.  Corporations also have training and development programs, and will even pay for their employees to attend college.  Below is a map showing the concentration of higher education in the United States. 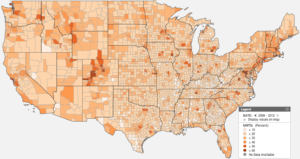 If you live around a city, you know that it is easy to take classes at night.  Whether in cooking, finance, public speaking, language, or technology, if you want to further your intellectual development and career credentials, you don’t need to travel far.  There are probably many offerings, and it is easy to fit one into your life and schedule.

If you don’t live near a city, you may be less likely to pursue these opportunities.  Between the volume and proximity of higher level classes, and the support provided by large companies, furthering your education in a city can feel like a no-brainer.  While similar offerings can be found in rural locations, it is usually more difficult for your employer to pay, and there may be fewer class offerings to choose from.

The Bureau of Labor Statistics keeps information on the relationship between education and pay, and there can be no debate.  The higher level of education you attain, the more you can expect to earn.

Whether you live in a city or not, if you have the opportunity to invest in your career training, don’t hesitate.  The sooner you increase your level of training and education the sooner you will make more money.  In 2017, the difference in average pay between a Bachelors degree and a professional degree accounts for a 36% increase in pay!

Obviously if you have substantial income enough to put money away, you should.  But if you are young, and you have the opportunity to invest in your location and your education, you should start there.  Over the course of 30 or 40 years, the difference in income could be millions of dollars in earnings.  Take care of your location and career advancement opportunities, then look into your options for furthering your training.  If you still have money left over, put it in your 401(K)!  Learn how to get started with a 401(k) here.