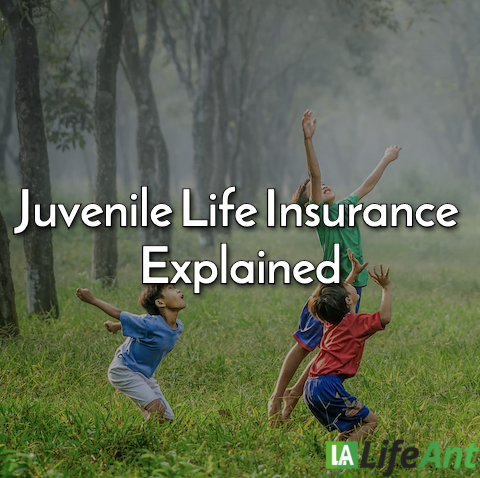 Juvenile insurance is usually issued on one of the following plans:

The death rate during the first year of life is higher than at any age until age 65. Consequently, to hold down the cost of juvenile policies, a few companies restrict the coverage during the first year of life to a fraction of the face amount of the policy. Other companies will not accept applications for insurance on the lives of children under some age such as two weeks.

A type of juvenile policy, known in the life insurance industry as jumping juvenile is popular. It is called junior estate builder, junior accumulator, guaranteed estate, or some other name by the various companies issuing it. In its most common form, it is sold in units that provide $10,000 of protection to some age such as 21, automatically increasing to $50,000 at that time with no evidence of insurability and with no increase in premium.

The basic jumping juvenile policy is usually endowment at 65, life paid up at 65, or continuous premium whole life. Its purpose is to protect the insurability of the child, provide protection for the parents against expense resulting from the death of the child prior to 21, and give the young man or woman a larger amount of insurance coverage at the age when the need for it will be greater by reason of increased (or soon to be increased) responsibilities.

A number of arguments are used in the sale of juvenile insurance. These arguments appear to be more effective in making the sale than in solving the buyer’s problems. For example, one sales argument for juvenile insurance is to establish a fund to pay the cost of for final expenses. Hospital and medical expense insurance provide a more logical solution to that problem.

Another sales argument is that a fund can be accumulated through a juvenile endowment at age 18 to finance a college education for the child. Insurance on the life of the parent combined with growth investments appears to offer a better approach to that objective.

Still another argument is that the juvenile policy has the advantage of starting a permanent insurance program for a child at a lower annual premium or that a part of the child’s insurance program will be paid up at a relatively early age. For example, the annual nonpar premium for a $100,000 life paid up at age 65 issued at age 5 would be $730 in contrast to $1529 issues at age 25.

The annual nonpar premium for a $100,000, 20-pay life issued when the child is under 6 months will be $1151 and will give the insured $100,000 of paid-up insurance before he reaches age 21. Of course, juvenile insurance will accomplish these objectives, but can these premiums be used more effectively in an insurance program designed to solve more pressing risk management problems? Or could building a diversified investment program for the child use these funds more efficiently?

Perhaps the fundamental use of juvenile insurance is to guarantee that the child will always have some life insurance even if he later becomes uninsurable. Individual juvenile policies offer the opportunity to purchase coverage in excess of and in addition to that available under the family policy.

Limitations in the Use of Juvenile Insurance

Juvenile insurance often absorbs premium dollars, which should be used for protection on the life of a parent. In theory, at least, most companies will not consider an application for juvenile insurance (except in special circumstances, such as the un-insurability of the father) unless that parent himself carries a “substantial” amount of insurance. However, the rate book of one conservative company defines substantial as an amount “at least twice the ultimate amount of insurance in force and applied for on the lives of all of the father’s children.” This would seem to mean that a parent with only $60,000 in force on his own life could apply for and receive $30,000 on the life of a child.

The college fund endowment policy is particularly expensive. The annual premium for a $100,000 endowment at age 18 issued on the life of a child under age six months is $472 in a typical company. This amount of money will; purchase more than $350,000 of continuous premium whole life insurance on the life of the father, assuming he is age 25.

If the father purchases $350,000 of whole life insurance on himself rather than $100,000 endowment at age 18 on his child, enough funds will be available to see his son through grade school, high school, and college should the father die before his son reaches school age. If the father is still living when his child reaches age 18, the cash value of the $350,000 of life insurance on the father will be available to help finance the son’s college education. The cash value of this policy will be about $76,000, only $24,000 less than the face amount of the proposed endowment at age 18 on the life of the son.

The payor (person who pays the premiums) agreement provides that if the owner of a juvenile policy (usually a parent) dies or becomes totally and permanently disabled before the policy anniversary nearest a given age of the insured (usually 21 or 25), the company will waive subsequent premiums on the policy up to that age.

Most payor benefits as well as the juvenile policies themselves are written nonmedically. Various underwriting rules relating to maximum and minimum ages of the payor and of the insured, and to minimum age differences, may be applied.