Risk is the most important thing to any life insurance company. Understanding and quantifying risk is key to their business model and it is what all of their policies pricing is based upon.

Three terms closely related to risk are peril, hazard, and loss. A risk is the possibility of a loss and a peril is the cause of the loss. Hazards, on the other hand, are things that increase the likelihood of a loss. Continue reading below to learn more about perils, hazards, and losses, and how they apply to life insurance. 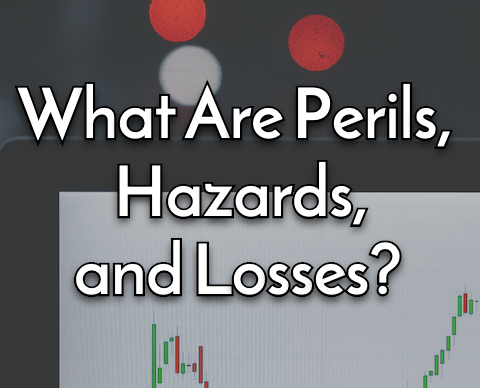 A peril may be defined as the cause of a loss. Examples of perils, which can cause loss of life values, are economic aberrations, bodily injuries, physical and mental illnesses, premature death, and superannuation. Causes of loss (bodily injuries, sickness, premature death, old age) often are loosely called risks. Correctly, the risk is the uncertainty about the happening of an event that can create a loss, whereas peril is the cause of the loss.

Students of insurance need to understand the concept of peril because insurance policies nearly always limit the perils from which loss is covered. Life insurance usually is written to cover death from any cause except a suicide that occurs within one or two years after the policy is issued. Health insurance policies sometimes restrict coverage to losses caused by particular named accidents or illnesses. More frequently, they cover losses caused by any accident or illness except those specifically excluded. Annuities have no peril restrictions. As long as the insured is alive, for whatever reason, his annuity income continues.

Hazard is a condition that increases the chances of a loss arising from a peril. For example, an accident may be the cause of a permanent and total disability. The cause of the accident may have been faulty driving attributable to carelessness, poor eyesight, liquor; it may have been a faulty vehicle, with bad brakes, poor lights, defective tires; or it may be bad driving conditions such as icy roads, glaring sun, poorly marked highways. These conditions are hazards and must not be confused with perils. Illness, for example, is a peril creating a loss of income and medical expenses, but it is also a hazard increasing the chance of loss by death.

For insurance purposes, two types of hazard may be distinguished: physical and moral.

Moral hazard is a subjective characteristic of the insured, which increased the chance of loss by reason of intention or lack of responsibility of the insured. It is found in the insured’s habits, financial practices, or lack of integrity. In life and health insurance, moral hazards are present in criminals, people who associate with criminals, those who skirt the edges of the law, people with unsavory moral reputations generally, alcoholics, dope addicts, and philanders. A problem relating to moral hazard in health insurance, not found in life insurance, is claim exaggeration either through outright false statements or through malingering (that is, extending their hospital stays beyond the time needed for recovery, or by staying away from their jobs longer than is necessary).

Possession of insurance may itself create a moral hazard. For instance, possession of hospital insurance increases the incidence of hospitalization arising out of indifference to loss. There is no evidence that an individual becomes careless of life simply because he is insured.

A study of hazards is important to the understanding of insurance. Insurance companies must review the hazards involved when an applicant for insurance is submitted. If the hazards are unusually significant, the company must charge a higher premium, restrict the coverage, or deny the insurance. Insurance buyers must review their policies to be aware of the hazardous exposures not covered by their insurance so that they know what hazards to handle through some other before the loss arrangement.

Loss is the detriment resulting from a decline in or disappearance of values arising from a contingency.

The major types of losses insured against through a life insurance contract are those produced by expenses and interruption of income associated with death. For the typical family, loss of income resulting from the death of its breadwinner is the more serious of the two; however, the final expenses of any family member can be a problem in those families operating on a close budget. For the wealthy family, death taxes and the cost of probating the estate could be a more serious loss. Loss of income, although large, might be of only secondary importance, especially in view of the high tax rates applicable to that income.

Accident and sickness also involve both expenses and income losses. Medical, surgical, and hospital expenses can amount to large sums. A disability resulting from accident or sickness can cause loss of income for lengthy periods, sometimes permanently. For the typical family, both types of losses can be serious, and they require efficient before-the-loss arrangements fro and effective after-the-loss balance between resources needed and resources available. What an efficient before-the-loss arrangement is and what an effective after-the-loss balance between available and needed resources is will vary from family to family. Decisions in these matters are personal and are governed by one’s own set of values. However, some procedures for use in analyzing the problem and in reaching decisions on these matters have been developed and they are discussed later in the text.

Risks, perils, hazards, and losses are four closely related terms in the insurance industry. To recap: