There are a lot more concerns around death than the financial implications, yet it is important to understand them all.  Suicide is a serious matter and the thought of providing for people after committing suicide, or not, may ultimately influence someone’s decision to commit the act or not.  If you or someone that you know is contemplating suicide, please get help.  The National Institute of Mental Health’s (a government agency) suicide prevention information can be found here.

That being said, a life insurance company will pay out a claim on death by suicide, but not immediately after the policy was purchased.  If they did not have a waiting period, many people who were thinking about suicide would take out a large policy right before they killed themselves.  This would lead to very negative consequences for the life insurance company, and incentive suicide to some degree.

As mentioned, the reason for this two-year provision is that life insurance companies do not want people buying life insurance policies before they kill themselves. It is also deemed to be against the public interest to allow “a reward” for suicide. By putting this two-year window in, insurance companies protect themselves from desperate individuals seeking to collect a quick payout for their family.  Most people who wish to commit suicide, according to insurers, will not wait two years to do so, hence the two-year suicide clause.

History of Mental Health Issues or Past Suicide Attempts 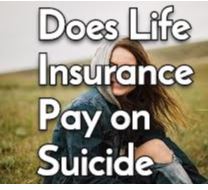 It is possible that given your specific history, such as a documented case of trying to commit suicide in the past or a history of mental health issues, that a life insurance company will exclude suicide from a covered death.  They might do this if they perceive you to have a very high chance of committing the act at some point in the future. If your policy explicitly excludes suicide as a covered death, be aware.

What to do if Suicide is Not Covered

With proper care and medication or therapy, you may be able to show that any mental issues are under control.  While not likely, a life insurance company could amend your policy to cover suicides if you apply for reconsideration.  More likely, you can apply for a new policy where it is not excluded.  You may be able to get a better deal on a new policy than your old policy if you qualify for a better health rating.  You can always compare quotes from different providers here and investigate your options.  Don’t surrender your current policy until a new policy is issued though, otherwise, you risk being rejected on your new policy and going without coverage altogether.  You may also be assigned a lower health rating, or your age may be advanced enough that the price is higher.