Are Brighthouse Financial and MetLife the Same Company? 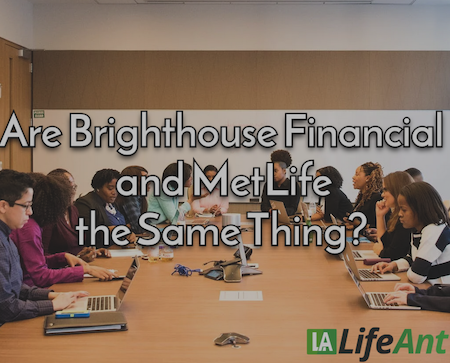 What Does This Mean?

How Does This Affect Policyholders?

If the insurance company that issued your insurance policy was separated from MetLife and became a subsidiary of Brighthouse Financial, there is nothing that you need to do. You will not be charged any fees and there is no action that you will need to take. You will receive information about the change, including how you can contact and receive notifications from Brighthouse Financial. In the event that you do need to take any type of action, you would have been notified.

If you had a financial service representative, that individual will remain the same. As such, you will be able to continue communicating with him or her about any concerns related to your life insurance policy.

The Bottom Line on MetLife and Brighthouse Financial

If you held a life insurance policy that was issued under a company via MetLife and that company became a subsidiary of Brighthouse Financial when the separation of the two entities occurred, there is nothing that you are required to do. While the two companies are completely separate, your life insurance policy will not be affected in any way. You will still receive the same coverage, and all of the stipulations related to your policy will continue to be the same.

You can contact Brighthouse Life Insurance Company if you have any questions, concerns, or comments. Alternatively, you can reach out to the financial service representative that you worked with under MetLife, as this individual will remain the same.

MetLife’s spinoff of Brighthouse Life Insurance company has been extremely successful. The new insurance provider is continuing to grow; they continue to carry a substantial amount of life insurance policies, and their value continues to increase. Don’t forget, if you are a Metlife client and you are looking to price shop, you can compare life insurance quotes here at Life Ant.